In the drizzle on Friday 20 of July, we completed phase 1 of A Drop in the Ocean! Wander down the seafront towards Steve Ovett’s statue and you can’t miss the final result – a wave of bubbly colour decorating the fence along the Volks Railway line.

It includes most of the 9,248 bottle tops that were collected by the CityClean beach-cleaning teams, cafes and kiosks along the seafront, as well as by organised beach cleans and individuals. Each one a bottle top that didn’t end up in the ocean.

Thank you to everyone who made it happen! The collectors, the counters, the makers, and the installers. You are amazing! 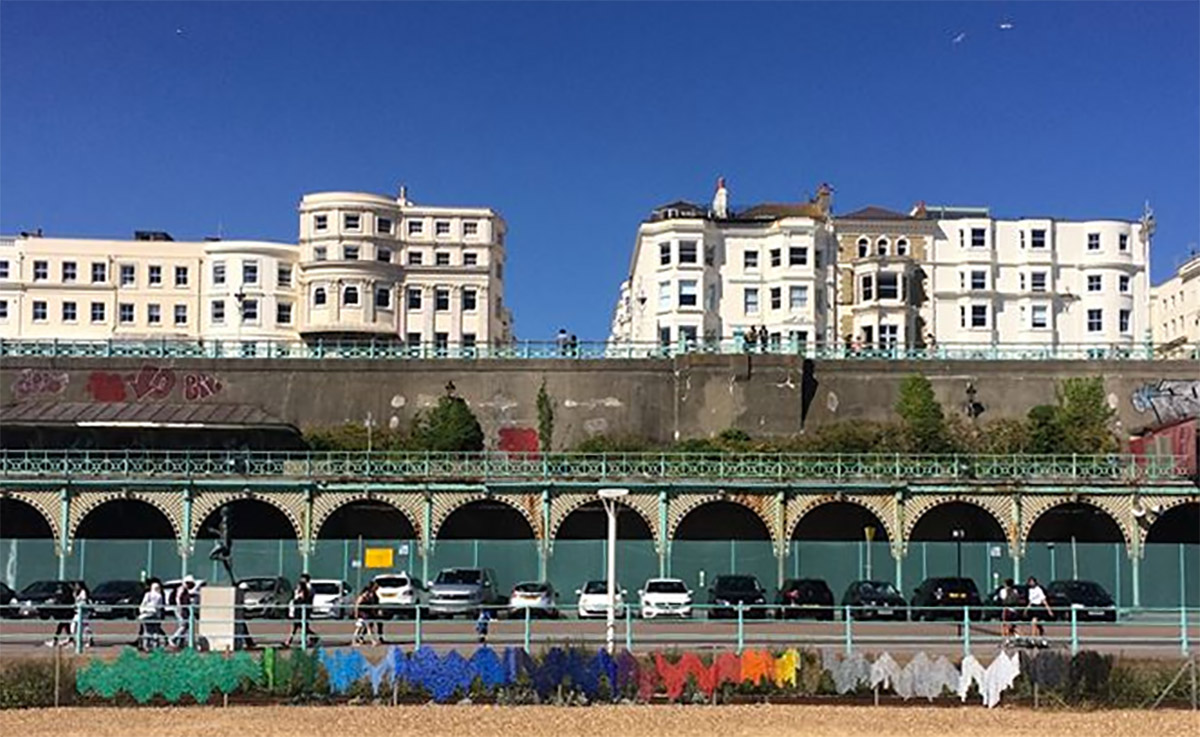 9248 the total number of bottle tops collected and intercepted in phase 1.

The wonderful  Louise at InterViz, was one of those who helped us put up the bottle tops. As if that wasn’t enough, she then created this fantastic visualisation of how many bottle tops were collected, by whom, and what brands they came from.

And here are some other important numbers . . .

The number of days it took us to count and classify all 9248 bottle tops.

The number of miles of nylon donated to us by the fishing line recycling charity LISA.*

The number of days it took us to thread the plastic bottle tops together.

The number of fabulous volunteers who helped in making and hanging our installation.

* Destined to be recycled by LISA, this fishing line will eventually end up that way, but not before it’s been used to string together our bottle top installation.

Getting what I hoped for

No, I wasn’t  hoping for 9,248 bottle tops in phase 1. Honestly, I had no idea how many we’d get.  But at the heart of this project there was another precious goal, one that I described in our story:

“In essence, this is a story about collecting and counting bottle tops. . . . But underlying all that is making things happen as a community that cares. A Drop in The Ocean is as much about connecting people who care as it is about collecting plastic.

Through organised beach cleans, through your individual or informal groups efforts, through the physical making of our infographic in a series of workshops, we hope bottle tops will bring people with enthusiasm and good ideas together.”

Wow! How that happened made me glow all over! The people I’ve met, the connections I’ve seen being made between people, the spark in people’s eyes as they made those connections and spoke about a shared purpose, that was a priceless takeaway from our workshops in phase 1. Just thinking about it makes me grin. “Joy” is the only word I can use to describe it. Even though I’d hoped for these type of connections, the extent of it was unexpected.

Each day there were new faces, and ones that kept coming back, tirelessly threading bottle tops together. There were the lovely folk at the Volks Railway, who punched lots of holes when they weren’t busy with their other tasks. There were the 3D design students from the University of Brighton. And then there were the souls behind local plastic-related projects like The Green Centre, Surfers Against Sewage and RubyMoon. 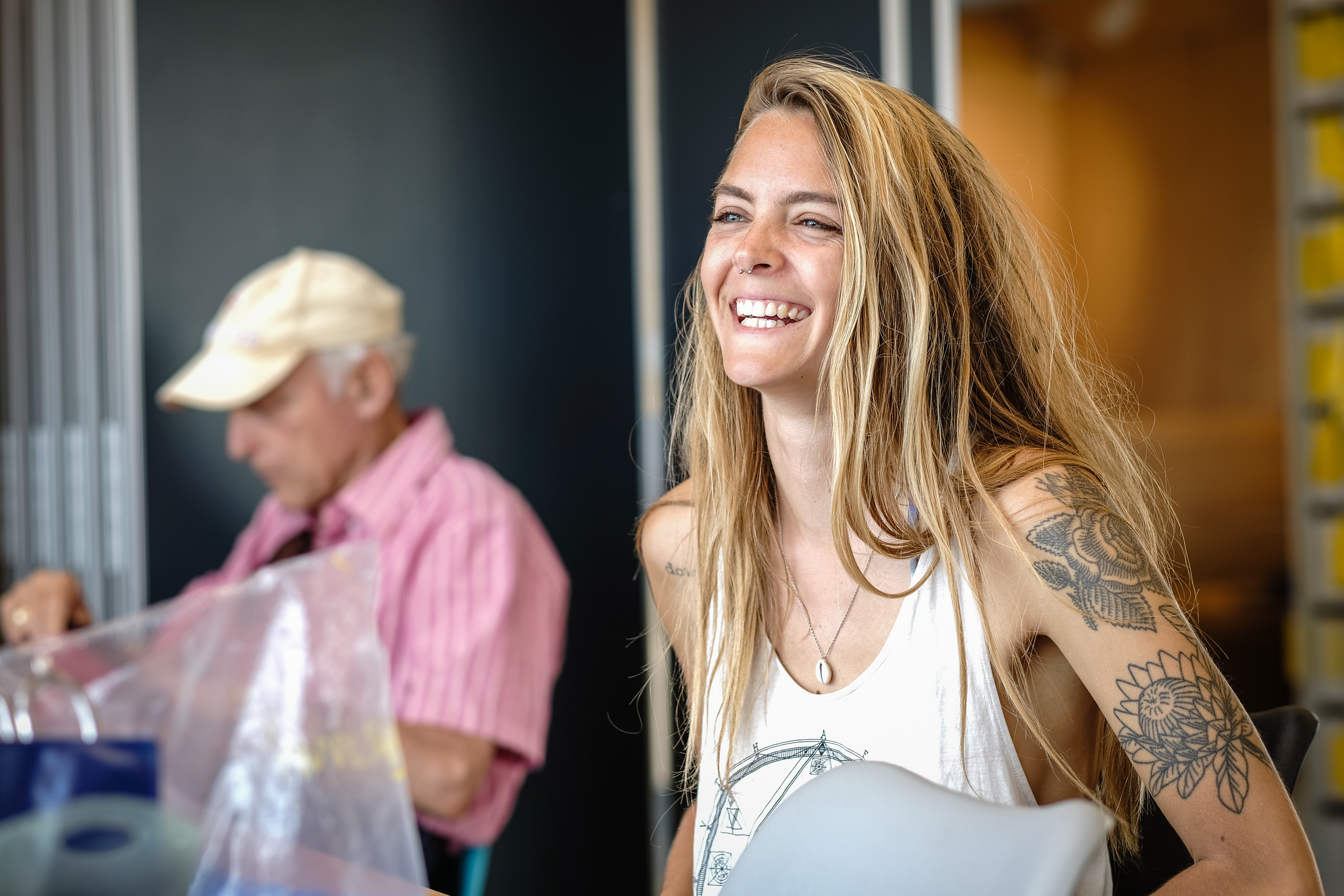 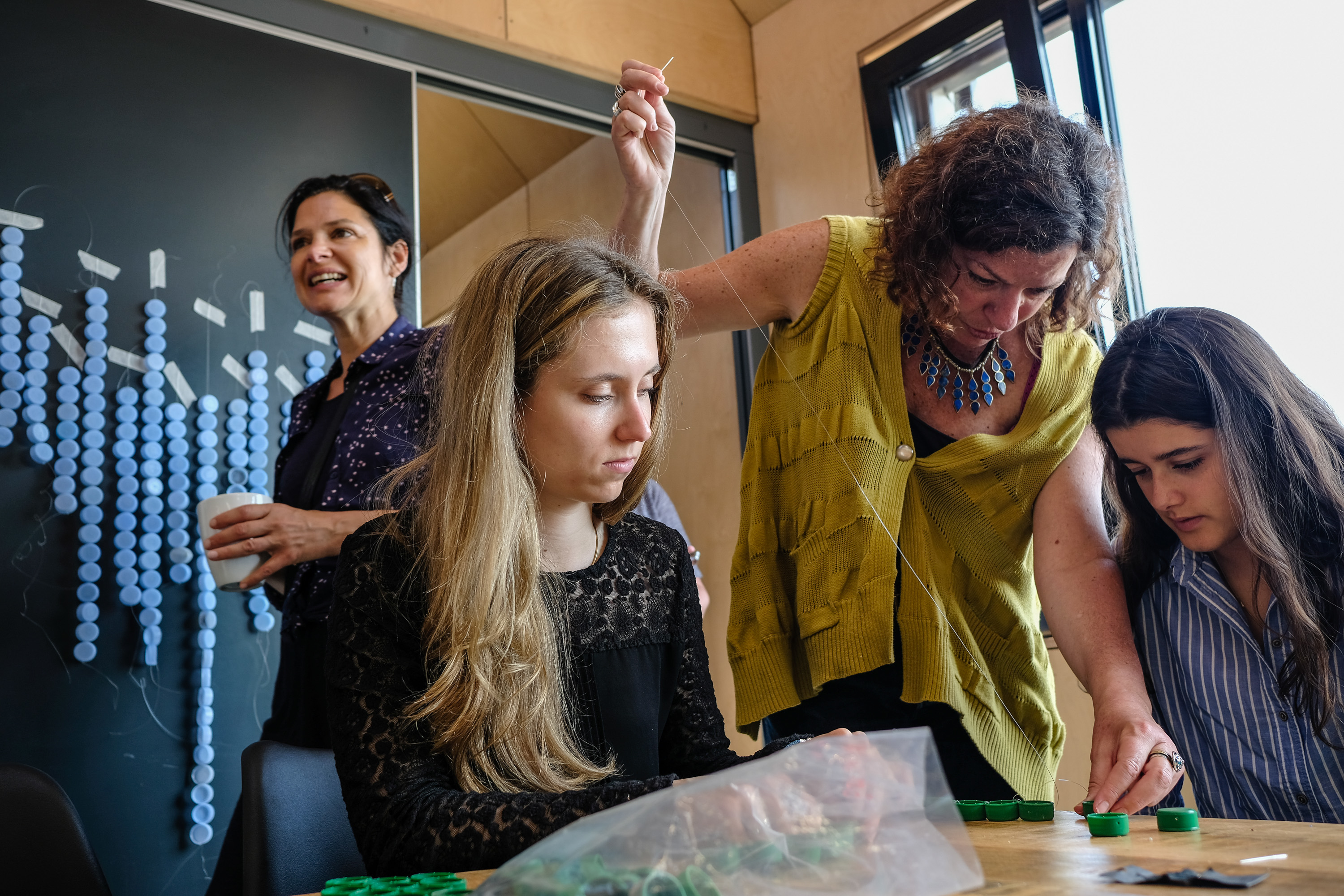 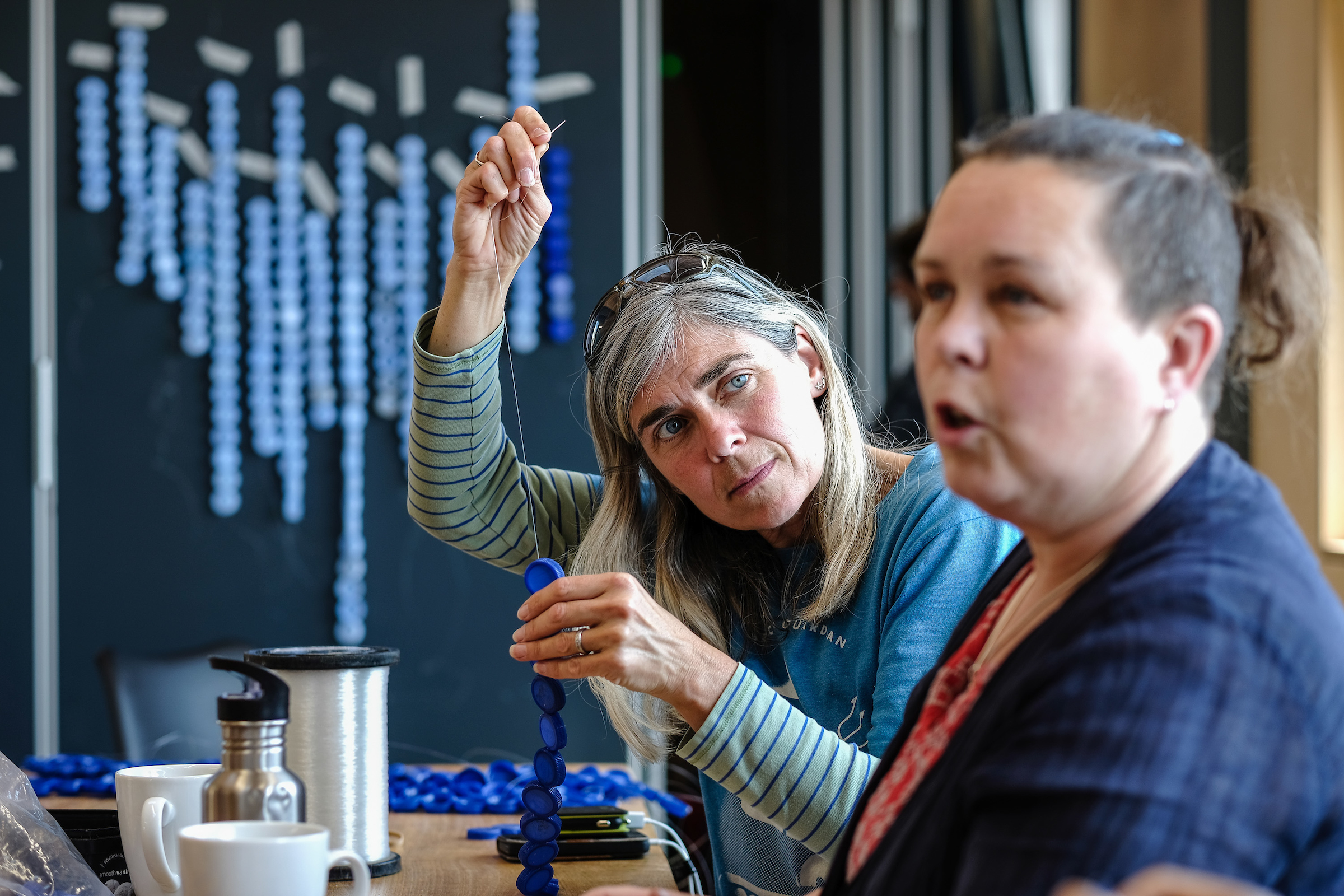 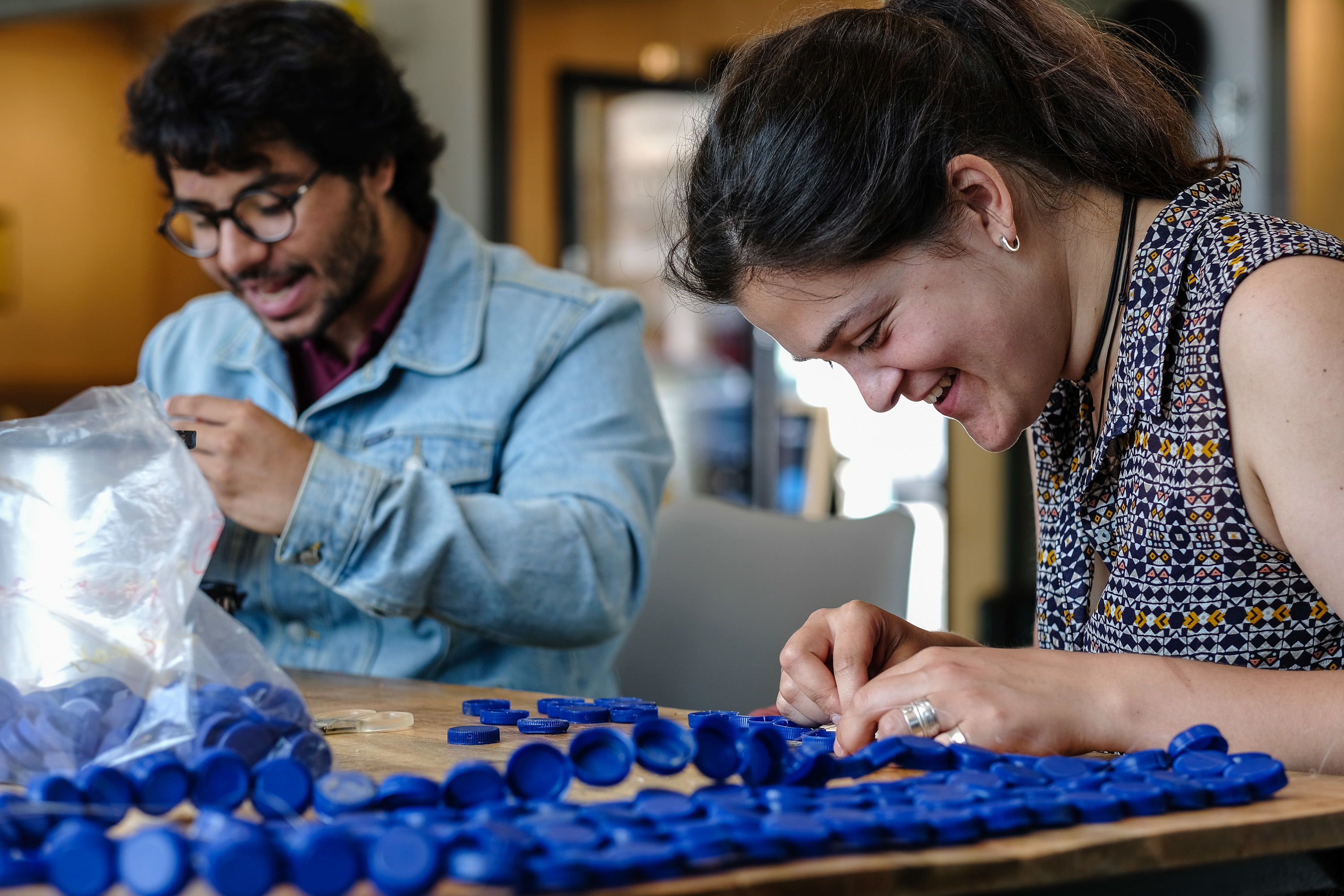 Figuring out the process

I always knew that we were going to make something with the bottle tops. Something that would get people talking and bring people together. What I hadn’t quite figured out before phase 1 was the detail. How long would everything take? How exactly would we classify the bottle tops? How would we string them together? How would we attach them to the fence? What would the final design be? If you’re interested, here are the details.

We did most of our counting up at CityClean’s Hollingbury Depot. It took 2.5 days to sort, count and record the data on each and every bottle top. I had great help from the Council and a few good friends. As we counted we recorded details that you can see in this data visualisation.

I’d decided we would use the tops to make a wave design. Knowing the numbers, brands and colours of the tops we had, I grouped them and estimated how many strings of each length – between  10  and 24 bottle tops per string –  to make for each group. This would give me the flexibility to create a wavy shape. A mini hole punch proved to be the best way to make holes in the tops and I spent many an evening punching in the lead up to our first workshop.

We started threading the tops we had the most of – the blue ones. These were threaded together using fishing nylon. Over 6 days, around 45 volunteers created the strings, some of them even taking them home to thread in front of the TV!

Then designing the final wave shape. And the trickiest bit: attaching it all to the fence. It took a day and a half of testing to figure it all out. Then, over the following week I hung the strings.  In the later afternoons, after the Volks train stopped running, small groups of volunteers came to help attach them to the fence .

Looking forward to getting stuck into phase 2 now! Counting takes place on 20 and 21st of August, and our drop-in making workshops will run from 10 to 14th of September. The workshop details will be published on social media.

Hope to see you there!
Irene