Using the power of community to illuminate possibilities

As we face the stark realities of the climate and ecosystem crisis, fear can isolate us. It’s hard to act or hold on to hope when we’re terrified, overwhelmed and lonely. Now, more than ever, we need the strength of community.

Over 3 weeks in November 2019 we created a chandelier from plastic bottle tops collected in Jubilee Library and along the Brighton & Hove seafront. It hung in the middle of the library from November until the end of January 2020. Beneath the chandelier was a space where people could gather to have informal conversations, learn, and reflect on how we can find courage and make changes to support each other and our natural world.

In this space we put up a series of information boards, and invited people to write down their ideas about how we could change things in our city for the better. Then  we invited the people of Brighton & Hove to join us for a series of facilitated Conversations Under the Chandelier.

Shine a Light was about using the power of community to illuminate possibilities. It was about sharing our fears, our grief and our stories so that we could rediscover realistic hope and imagine how differently we could live if we put our minds to it.

Together, we can shine a light on an alternative vision for the future, and draw on our community’s collective courage and creativity to start building it. 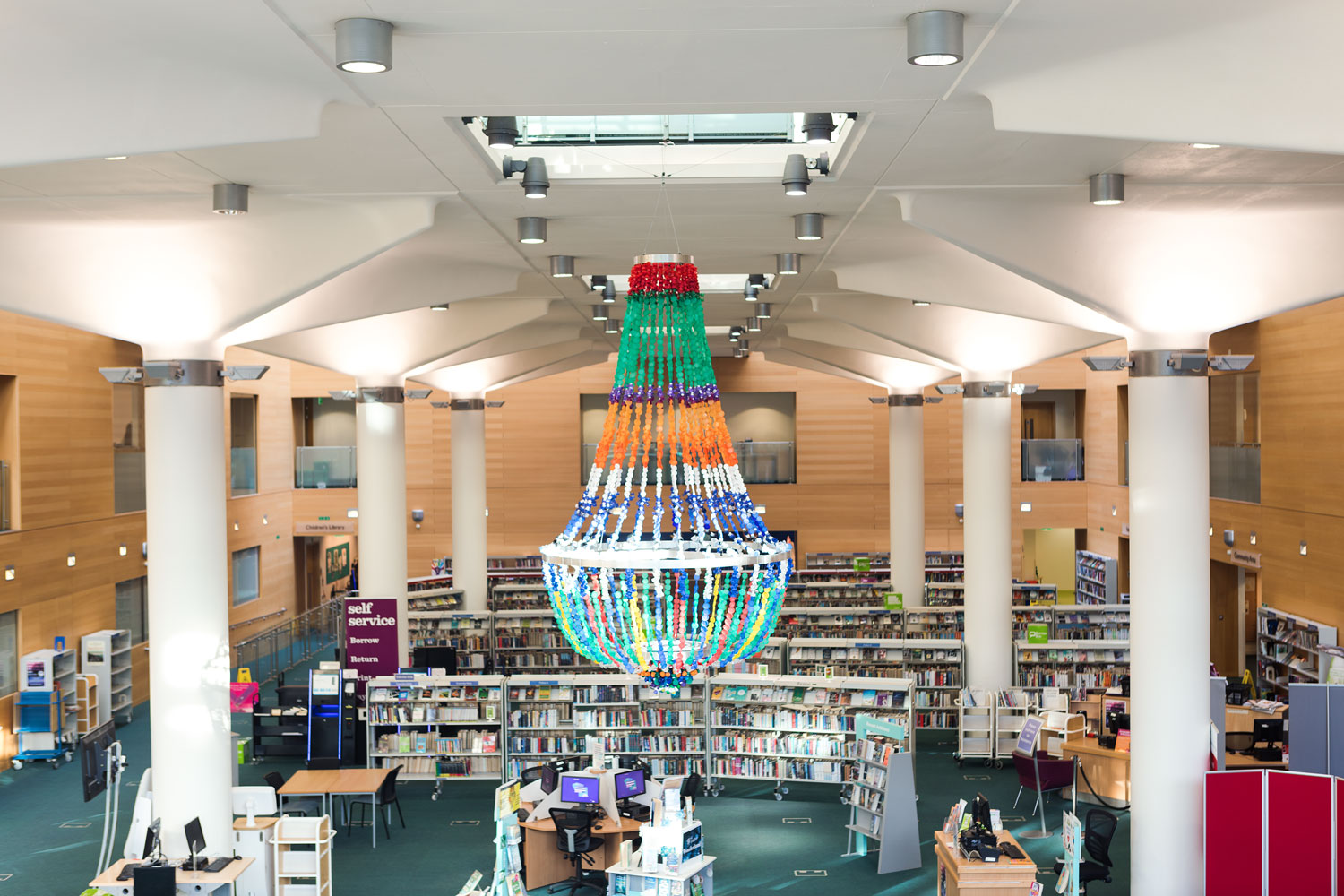 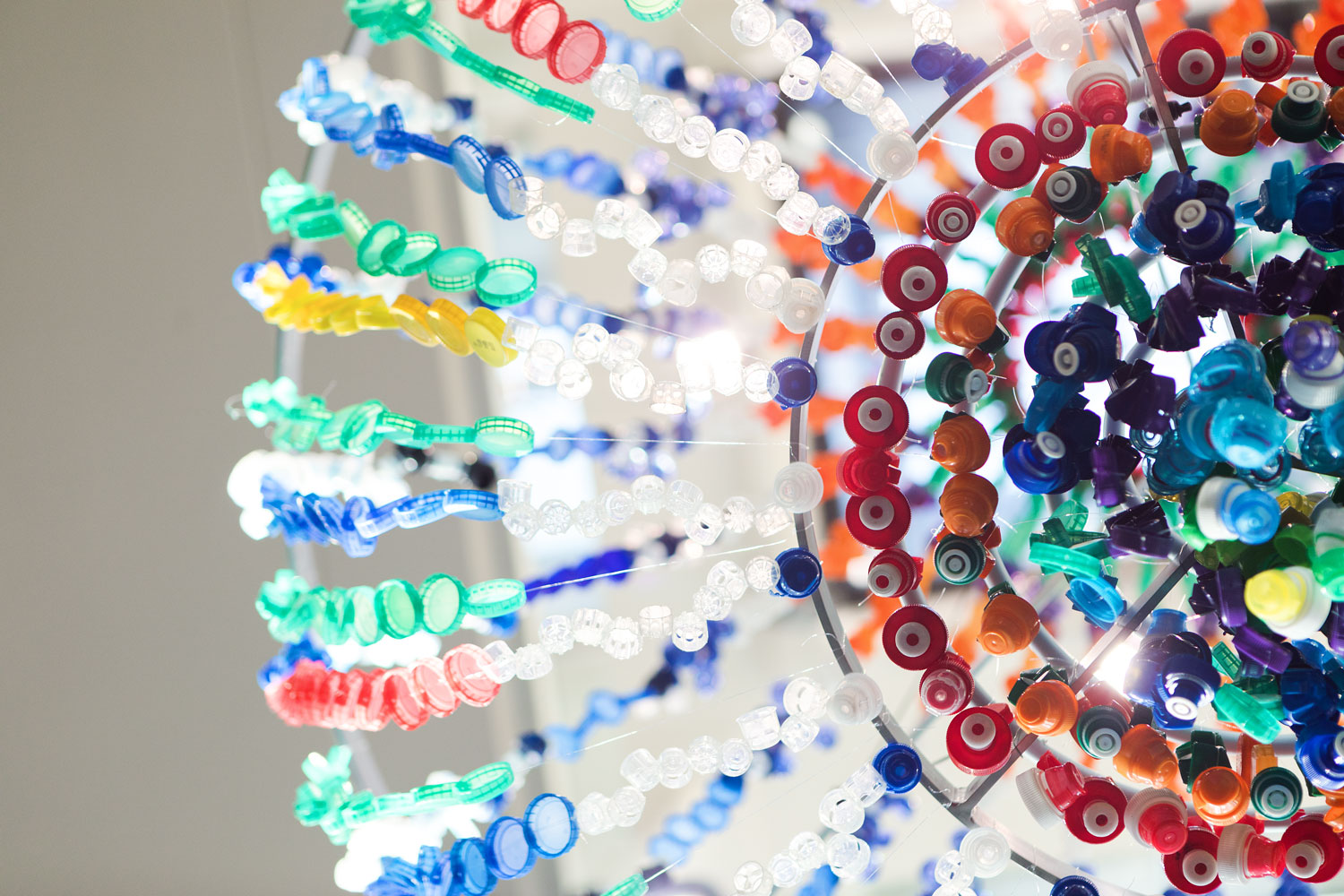 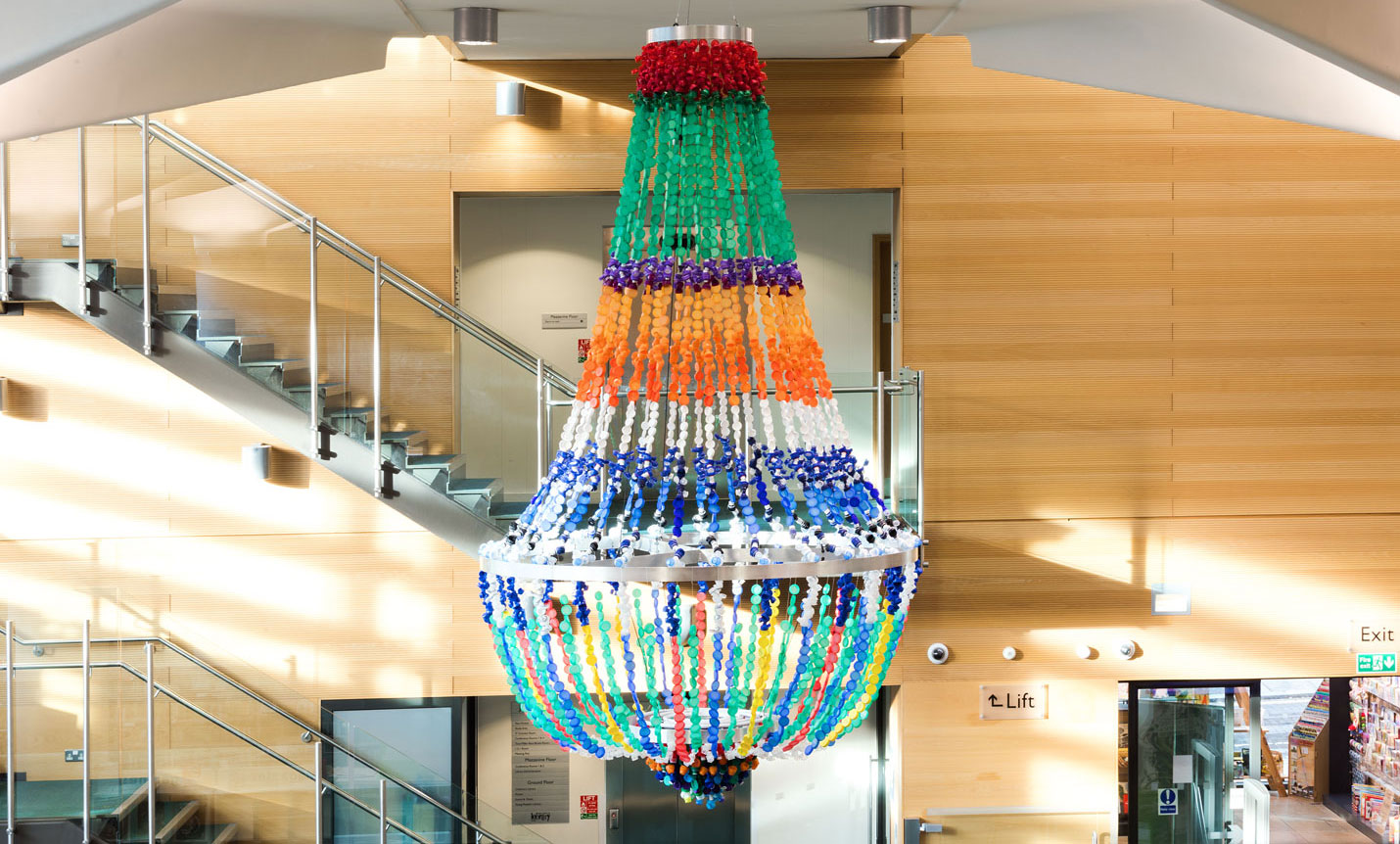 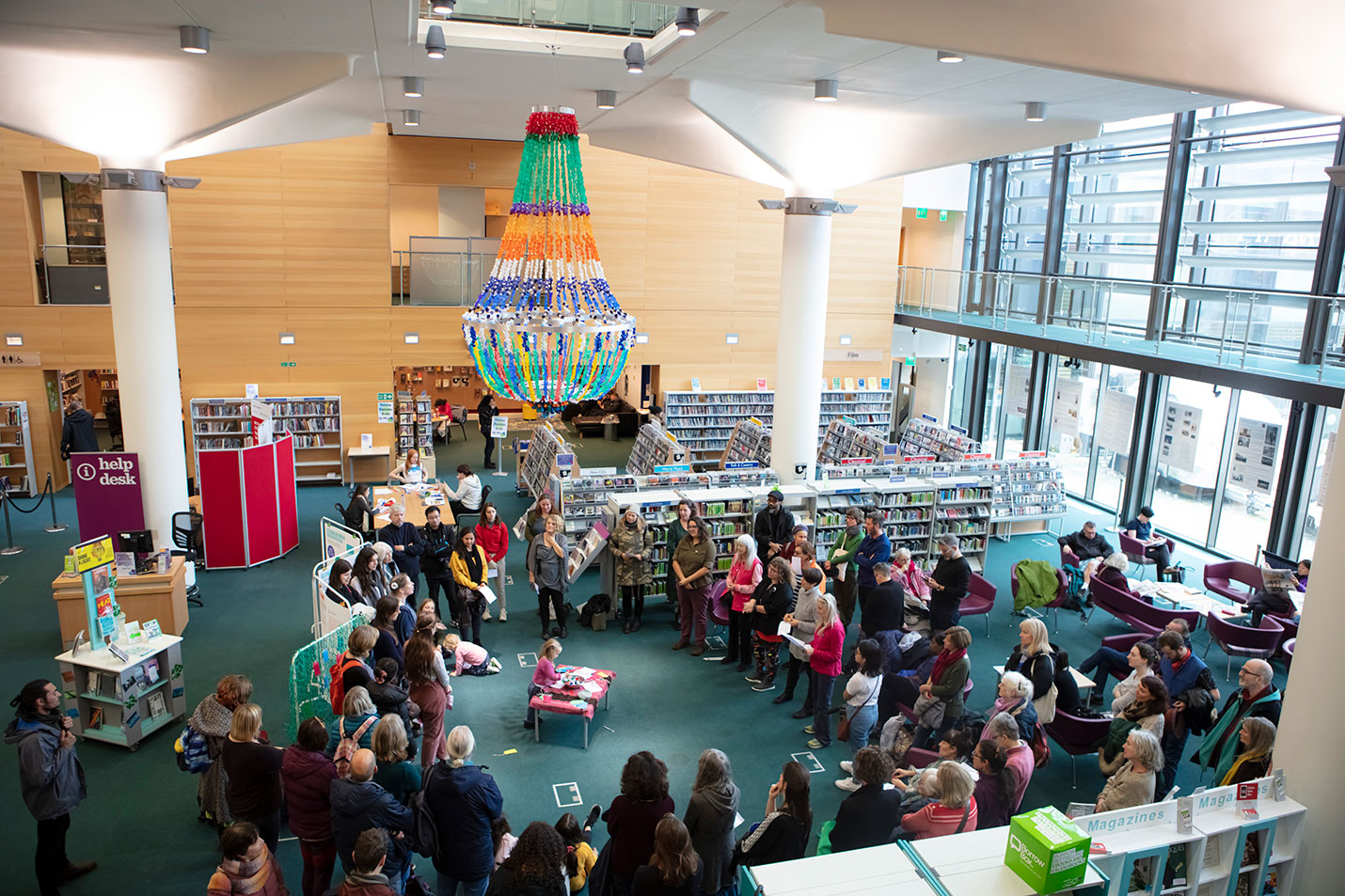 Interested in doing something similar in your community? The chandelier and information boards are available for you to use in your space. Get in touch to find out more.

CONVERSATIONS
under the chandelier

During January 2020, we invited the people of Brighton & Hove to join us for a series of facilitated Conversations Under the Chandelier. In these informal themed chats participants could hear what other people were feeling, thinking and doing about the climate crisis. They could share their ideas and connect with others in the community working to change things.

Our four themes were:

ME and the climate crisis

We started with ourselves: How can we face this crisis and do what is needed? How do we start to confront our fear and the potentially paralysing feeling of helplessness?

We were joined by Tamsin Bishton and Charlie Peverett, organisers of Five Minutes on the Apocalypse, a local meet-up “born out of their own need to take the time and space to look ecological disaster in the eye from time to time”. And Jane Glezinska, an ecopsychologist who facilitates Ten Steps Towards Personal Resilience and Empowerment in a Chaotic Climate. This programme aims to help people collectively process grief and anxiety related to the climate crisis, and build community connections.

FOOD and the climate crisis

Our second Conversation Under the Chandelier focused on food. The way we farm, eat and shop now causes a huge amount of waste and uses a lot of natural resources. How can we change things?

Joining us under the chandelier we had Thomas Daniel from Old Tree Brewery and Helen Starr-Keddle from the Brighton & Hove Food Partnership. We chatted about how we can connect with what we eat, empower people to grow and cook more of their own food, and develop food systems for a healthy and fair future. One where communities, rather than multinational corporations, have greater control over how food is produced and sold, and where there is no food poverty.

THINGS and the climate crisis

How do we use less things and make sure the things we do buy last longer?  How can we challenge the existing system where things are designed not to last? And the existing culture of ‘needing’ to own more and more things?

In this conversation we were joined by Victoria Jackson and Sam Jarman from the Brighton Repair Café and Jo Godden, founder of RubyMoon, a local ‘not-for-profit eco and ethical activewear brand’. We chatted about everything from the circular economy, the sharing economy and the revival of crafts and making , to restart parties and our right to repair and enhance our electronic devices.

PERSPECTIVES and the climate crisis

Imagination is the greatest resource we have in the face of the climate crisis. Yet our imaginations are constrained by  our Western perspective. In our final Conversation Under the Chandelier, we discussed how we might begin to change that.

We were joined by artist and producer Persephone Pearl from ONCA GALLERY and Peruvian documentary filmmaker, Ernesto Cabellos who has directed award-winning films that chronicle over 15 years of conflict between communities and mining companies in Peru including Hija de la laguna – Daughter of the lake. Together we discussed how creativity and stories are critical to our shared survival, help to build bridges and to expand the playground for our imaginations.

Bottle tops were threaded to make the chandelier

Volunteers helped us make it in a series of 4 workshops

The number of days it took to assemble the chandelier

Ceremony to come together as a community that cares 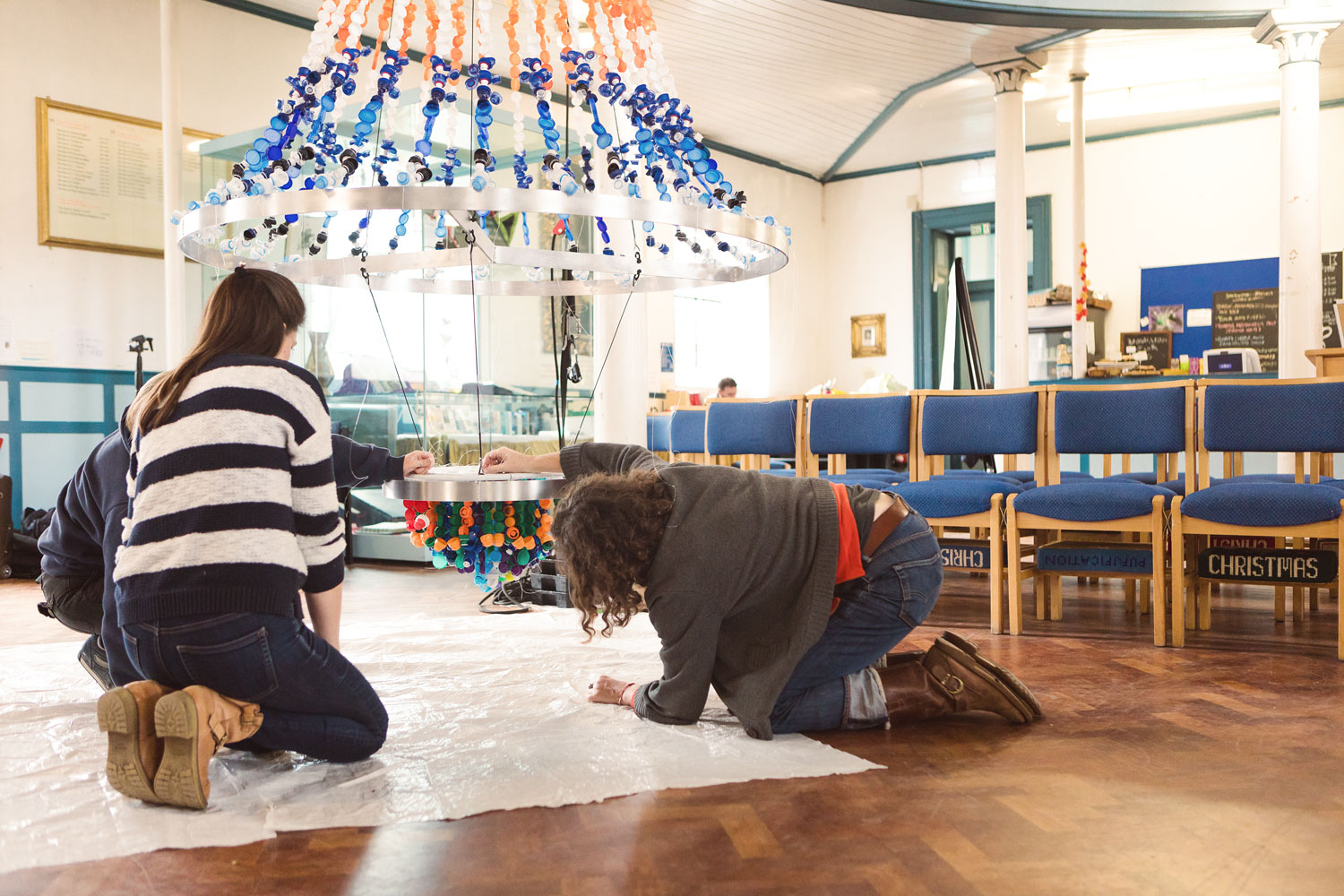 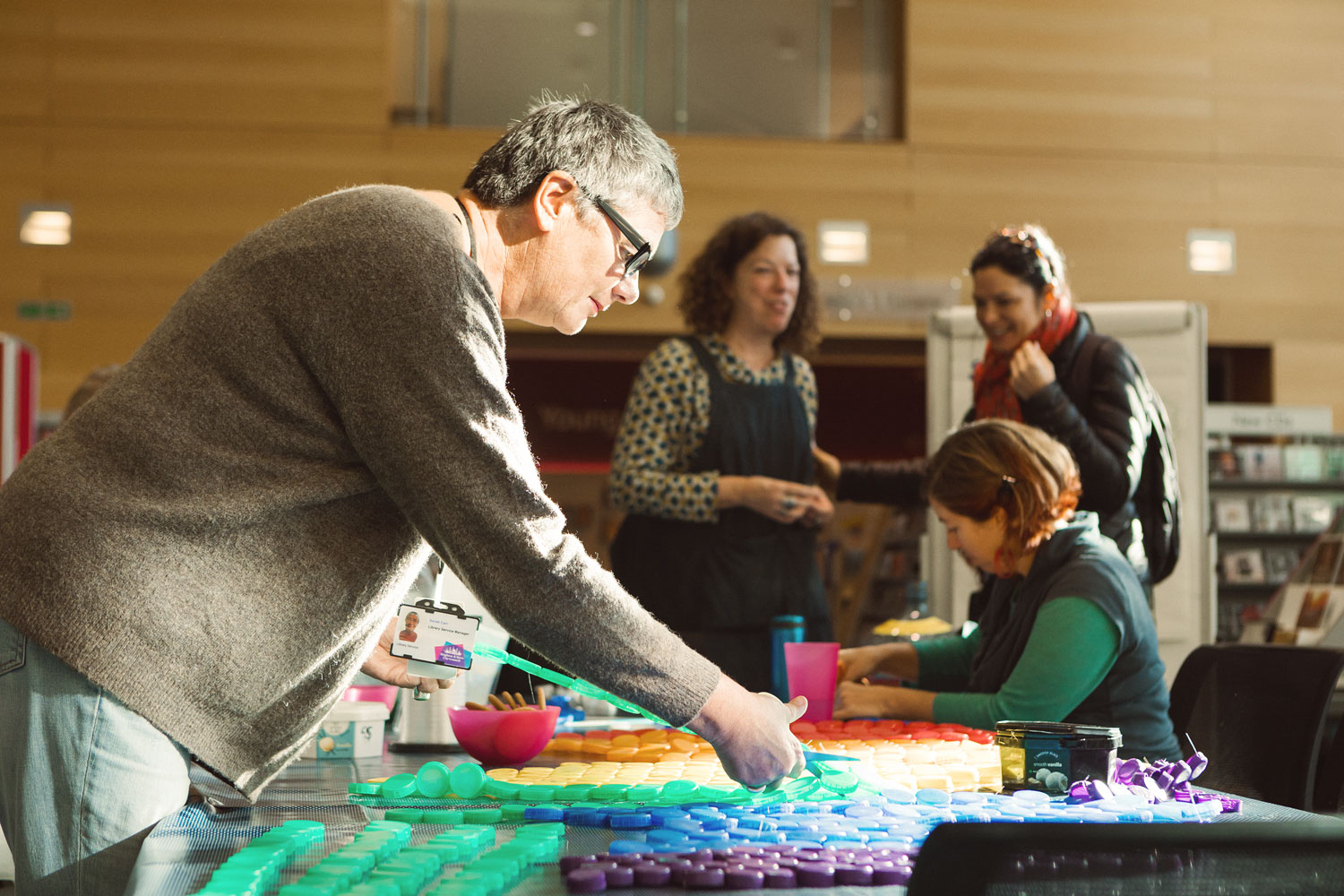 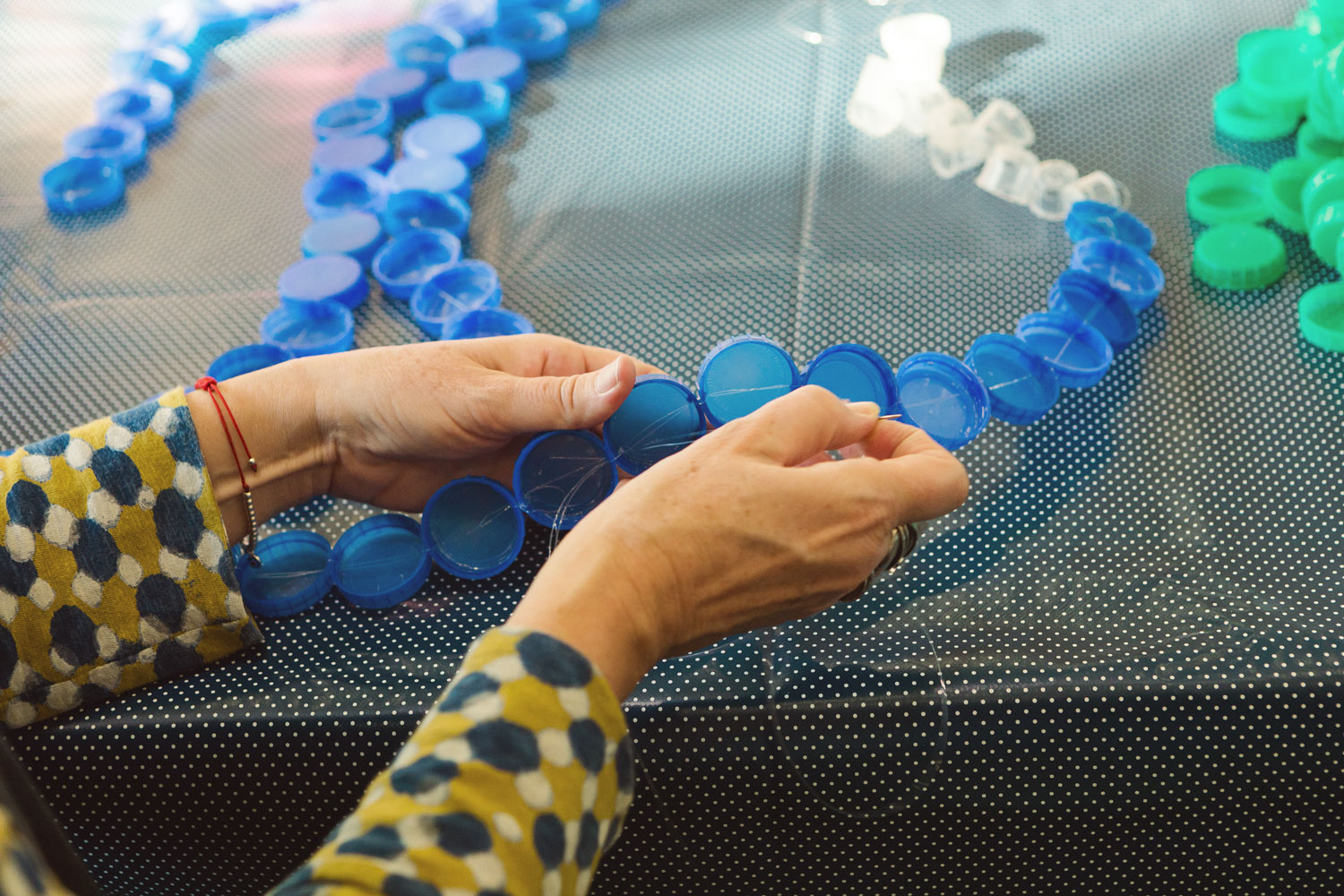 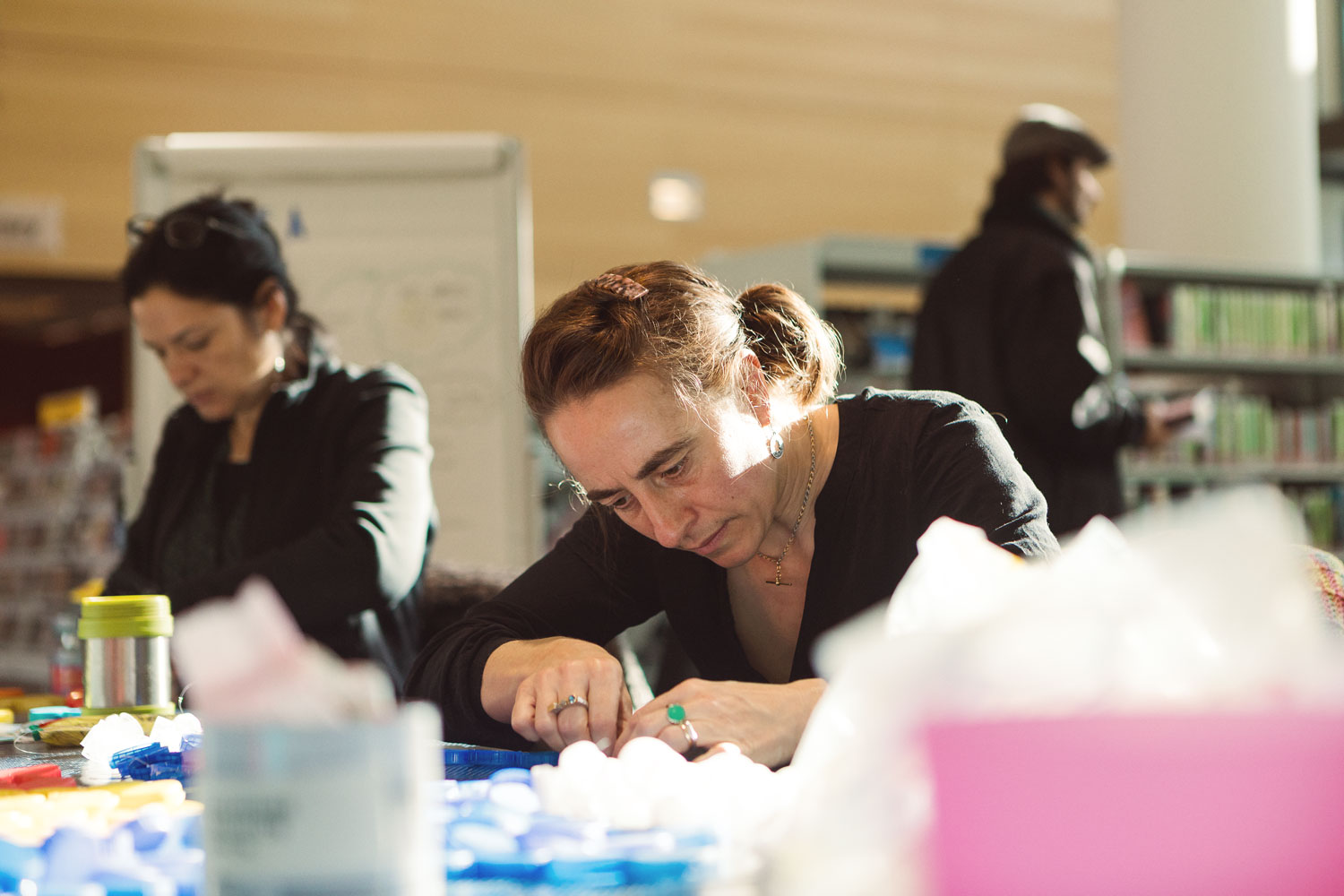 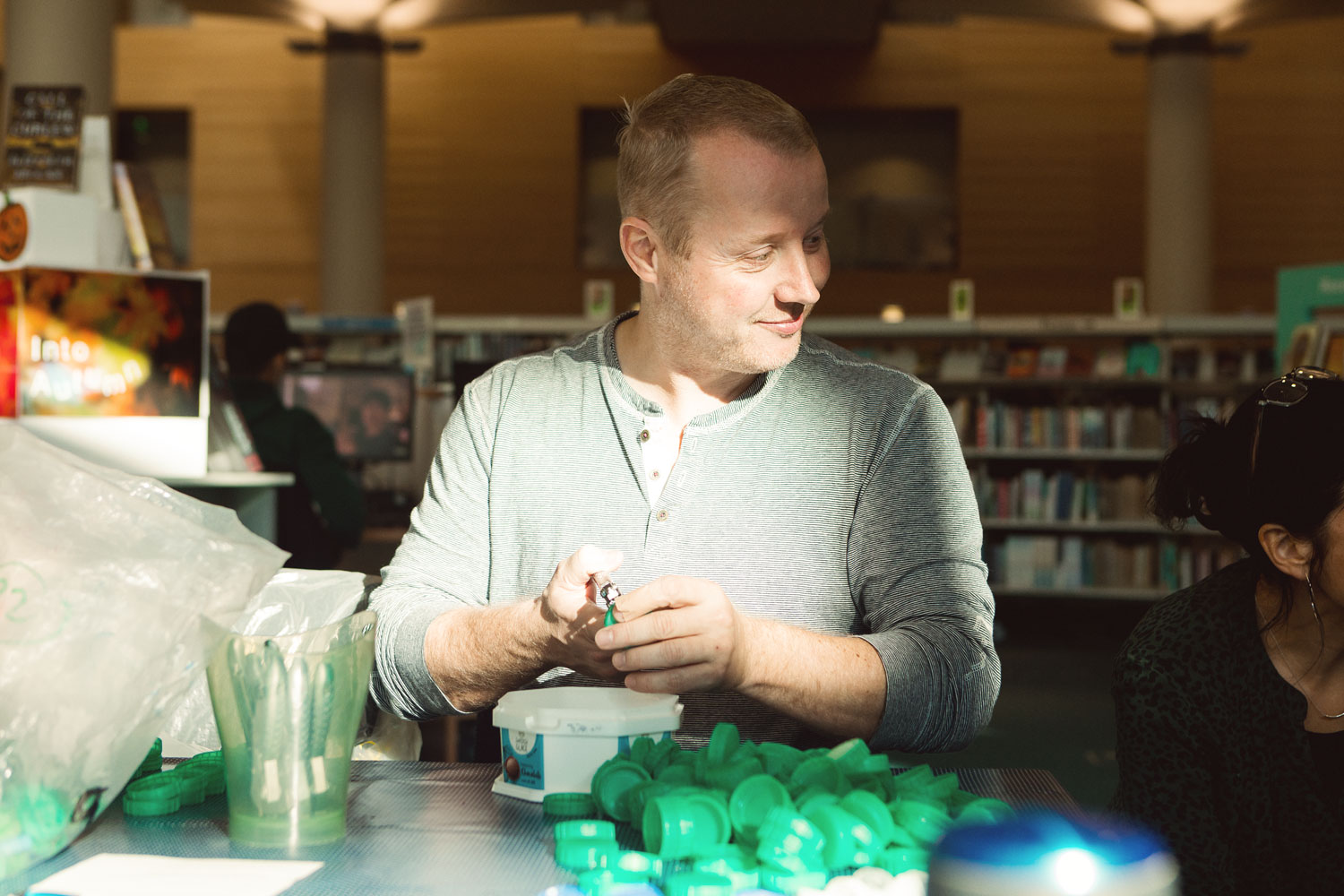 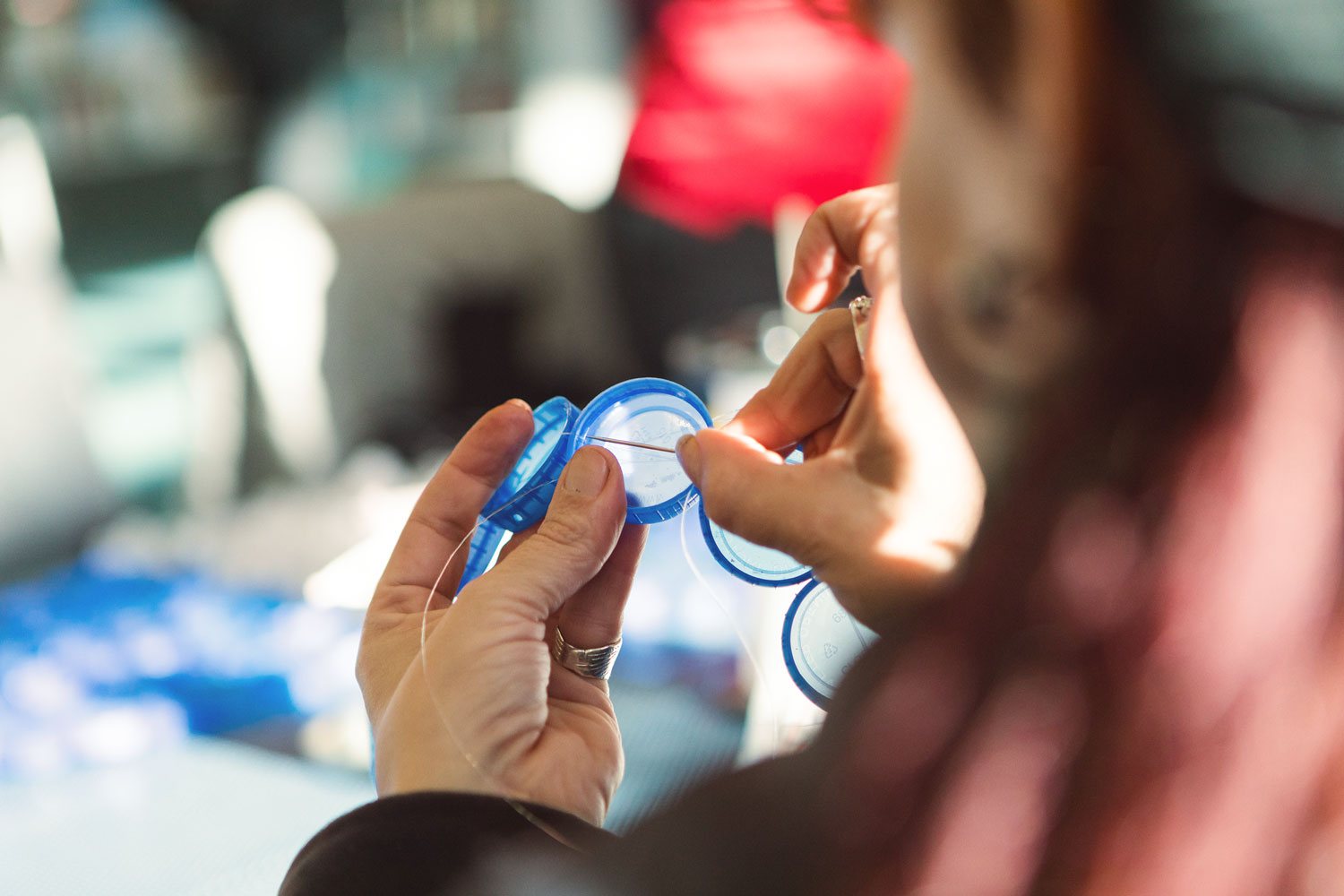 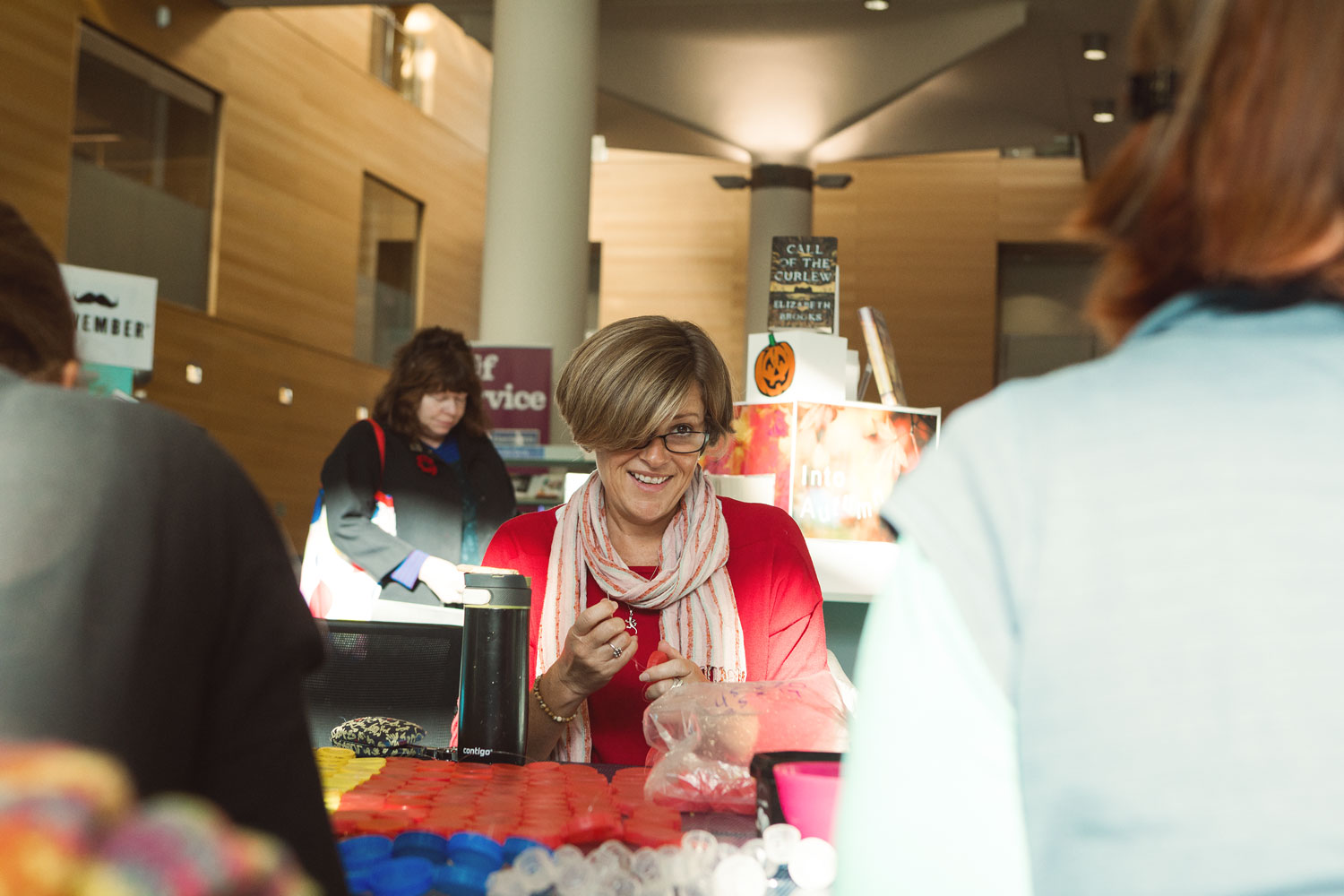 Shine a Light followed on from A Drop in the Ocean: The Wave. This original plastic-collecting, awareness-raising, conversation-starting project resulted in a colourful 50-metre wave of plastic bottle tops on the Brighton & Hove seafront. But not all the bottle tops collected during the project’s lifespan could be used on the fence.

Project organiser, Irene Soler, wanted to use every one of the 29,684 tops. As it was a statement about our throw-away culture, A Drop in the Ocean wouldn’t have been complete unless everything that was collected could be put to good use.

In the two years since Soler had conceived A Drop in the Ocean, the conversation around the climate crisis had shifted dramatically. Compared to just 24 months before, far more people now knew just how much of a fundamental societal change was needed. This final step in the project needed to both reflect that and support what was happening at the time.

Awareness of the problem was no longer needed, now the focus needed to be on the vision, and helping people overcome the apathy that can come from feeling powerless in the face of a global crisis. It still needed to create attention, to bring joy through colour and design (if only for a moment), and to grow from a process that facilitated human connection and difficult conversations.

The result was Shine a Light. Our hope was that in some small way it would help to strengthen our community and our resolve to imagine and build a radically different type of global society. One that is fair and balanced, where all people and the natural world are always more important than things.

Hire the chandelier for your next event

Get in touch to find out more
How are you all lovely people getting on? #adropi

Hope you all well and safe @themacsfarm after #sto

#ShineALightBrighton has landed in its new home @t

Early this morning the chandelier came down and le

PERSPECTIVES and the Climate Crisis: Our very last

And after the storm the beautiful sun showed up to

What a turn out for the kick-off Conversation unde

We feel so grateful (and lucky!) that the super ta